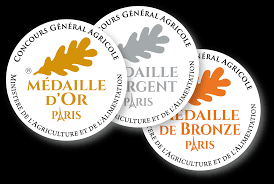 The 4000 food and beverage products showcased at the General Agricultural Competition each year, show off all that France has to offer.

This Concours was created in 1870 by the Minister of Food and Agriculture and it celebrates the savoir-faire of those participating by showcasing their talents in front of prospective customers, other professionals, and the press. However, quality over quantity remains the rule.A medal in the shape of an oak leaf of gold, silver, or bronze, is placed on the winning products. The medal is a mark of quality recognized by all consumers.

Starting in 2010, the Chamber of Agriculture will serve as the regional interlocutor for applicants. They will be in charge of ensuring that regional regulations are followed, as well as overlooking the promotions for applications, the hiring of jurors, the management of applicants, the sampling of the regional productions, each regional preselection panel, and the diploma ceremony.Each year, it is an honor for talented winemakers to be awarded with the oak-leaf sticker of the General Agricultural Competition.Known for its attention and dedication to quality products, the competition has an increased number of applicants every year.

- 378 champagnes were entered into the competition presented by 138 producers.

- 194 samples were pre-selected during a tasting organized by the General Syndicate of Winemakers held in January through February, and were thus included in the final competition.

Prize of ExcellenceThis prize awards the continuous, exceptional quality of a winemaker's champagne. It is awarded according to the results obtained during the last three sessions of the Competition.

In order to win, one must be a medalist in each contest while also obtaining throughout the competition the best results in their category in terms of how many products were entered.