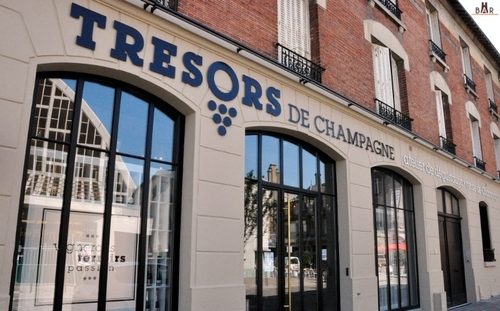 "Alone we go fast but together we go far"

In 1971, a group of Champagne viticulturists decided to showcase their best cuvées in a specially designed bottle. However, creating a glass mold for the bottle proved to be too large of an investment for a single winemaker to bear. So, this group of Champagne winmakers decided to band together officially and form a "Club" making the investme nt together and thus creating the "Special Club" bottle. Ever since the bottles creation, the "Club" has been known as "Club Trésors de Champagne" or The Treasures of Champagne Club. Together, the members of the group organize multiple champagne related happenings throughout the region : tastings of their still wines, baptisms of new incoming vintages, studies abroad (Port, Tokaj, Chianti, Bandol...), wine talks, participation in international workshops (Düsseldorf, London, Singapore), until the group eventually opened up a wine shop in Reims. The boutique will be celebrating its third year in May 2018.

The Club represents the excellence of the winemaker through its diversity. Ever member is passionate about their work, and defends with conviction the quality of their cuvées and the typicity of their terroir.Each Club-Man is free to create their own particular style depending on which grapes they focus on in their vineyards. However, the wine still needs to meet certain rigorous standards, and can only be approved of after being subjected to two official tastings.

The first tasting concerns vin clairs, or clear wines which is the still wine before it undergoes its secondary fermentation. The clear wines must be approved of before undergoing this secondary fermentation. The second tasting, evaluates the finished cuvée after it has aged for a period of minimum 3 years.Only the wines that have successfully passed both tests are allowed to be put on the market.